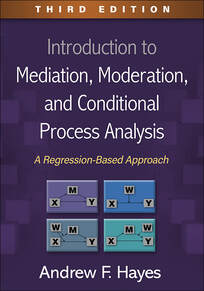 Introduction to Mediation, Moderation, and Conditional Process Analysis describes the foundation of mediation and moderation analysis as well as their analytical integration in the form of "conditional process analysis", with a focus on PROCESS for SPSS SAS, and R (#processmacro) as the tool for implementing the methods discussed.   Available as both an e-book and in print form, it is published by The Guilford Press.
​

Here are the data files and code used in this third edition of the book.
Here is the errata for the third edition.

Take a class from me on the topic of this book.

What's new in the 3rd edition?

• New code for R users accompanying every example, including PROCESS for R released in 2020.
• A substantially rewritten Appendix A to reflect new features added to PROCESS since the second edition, including a discussion of similarities and differences in the syntax structure in PROCESS for R compared to PROCESS for SPSS and SAS​
• A more detailed discussion of effect scaling and the difference between unstandardized, completely standardized, and partially standardized effects in Chapters 3 and 4 and the implementation of standardized regression coefficients in PROCESS.​
• A new discussion in Chapter 5 about a method for comparing the strength of two specific indirect effects that are different in sign​
• An expanded discussion and illustration in Chapter 5 of the partial correlation between mediators in a multiple mediator model and the generation of this correlation using a new PROCESS option.​
• The introduction in Chapters 11 and 12 of a bootstrap-based Johnson-Neyman-like approach for probing moderation of mediation in a conditional process model, with R code for generating a visual depiction of regions of significance.​
• A discussion in Chapter 14 about testing for interaction between a causal antecedent variable X and a mediator M in a mediation analysis and how to test this assumption in a new feature available in PROCESS. ​
• A section on power analysis and sample size section originally in Chapter 4 has been expanded and relocated to Chapter 14.

If you like Introduction to Mediation, Moderation, and Conditional Process, try my regression analysis book: Regression Analysis and Linear Models

Some of my related work that might interest you:

Hayes, A. F., & Montoya, A. K. (2017).  A tutorial on testing, visualizing, and probing an interaction involving a multicategorical variable in linear regression analysis. Communication Methods and Measures, 11, 1-30 [﻿PDF﻿]

Hayes, A. F., & Agler, R. A. (2014). On the standard error of the difference between independent regression coefficients in moderation analysis.  Multiple Linear Regression Viewpoints, 40 (2), 16-27.[PDF]